For any details, questions or offers please contact us by email or phone.

But do not forget that many of the activities we organize involve traveling in nature sometimes in areas where Internet access is limited. We try to respond to messages as quickly as possible, but sometimes we are late.

If there is anything urgent, please contact us by phone.

How did you decide to become an IML?
The magic of the mountain has always attracted me. There I learned that I live in a harmonious universe where the stars show me the way and the sun reveals the beauty of flowers. And it was there that I learned that the effort never goes unrewarded. At first I walked a little, on light hikes, but over time I decided to “conquer” the heights. I chose more and more difficult routes, higher and more distant mountains and I couldn’t keep all these beauties just for myself. I liked it and I like to share it with others. The step towards guidance then came naturally. In 2015 I had to choose between taking the mountain guide course, with a certificate valid only in Romania, or the one, apparently more modest, by IML (which I prefer to translate “hiking guide”) but with an internationally recognized certificate . It was not a simple decision, especially since at that time the profession of IML was practically unknown in Romania. However, I understood that an international affiliation is a guarantee of the quality and professionalism of those involved, in our case SGLM (especially as the example of other organizations of this kind in Romania did not convince me). Today, after 4 years spent with SGLM, I can still say that I have more advantages due to affiliation with UIMLA (continuous professional training programs, professional insurance, collaborations with colleagues from other European countries and not only) than limitations given by the status of hiking guide.

What did your life look like before you became an IML?
My life before I became an IML, hmmm, I’d say it looks like the life of a passionate mountaineer. I was waiting for the week to pass so I could go to the mountains again. After a while, in which we managed to cross the main ridge of almost all the massifs in the country, mostly only with my wife, we started to look at the mountains around us.
So it is that in 2007, advised on the phone by Mr. Dinu Mititeanu, we decided to go to the Alps. That was the moment when I realized that others have beautiful mountains. I then continued, mathematically, every year, to climb high peaks, especially in the Alps but also in other massifs: Tatra, Durmitor, Atlas or Himalayas.
Things changed radically after the IML course. The professional tours appeared and the circle of friends grew considerably and quite quickly. Moreover, certain aspects such as alternative routes, the conditions at the cottages, the duration of the tours, the choice of the people who form the group, became much more important.

What is the most memorable tour you have guided?
Over time, there have been several tours that I have organized and led and that I could count as guided tours. Given that I am IML only from September 2017, I will still choose a tour from this period and the winner would be: Laugavegur trail (which according to a top published by National Geografic is in the Worldwide Top 20 trekking routes).
Laugavegur is a 55km hiking trail from the south of Iceland that starts at the Landmannalaugar geothermal springs and continues to the Þórsmörk nature reserve located in the valley of the same name. The wide and dramatic valley of Þórsmörk is at the foot of Eyjafjallajökull, an active volcano whose latest eruption has severely disrupted air traffic around the world. The route traverses amazing landscapes, crossing gorges, glaciers and multicolored mountains of rhyolite.

What would be the ideal destination where you would like to guide?
In 2013 we spent a month in Nepal, during which we covered 2 well-known trekking routes (Gokio Valey and Everest Base camp) and at the end of the tour, when we were best acclimatized, we climbed Island Peak (which, despite the 6190m , is still included in trekking). The incredible landscapes, the cultural differences, the Buddhist religion and last but not least the aromas of the local gastronomy remained deeply imprinted in my soul. Today I plan to return to Nepal and I can say without hesitation that it is the ideal destination. Probably in the future the steps will take me to other wonderful places, at least I hope so and probably the ideal destination will change. 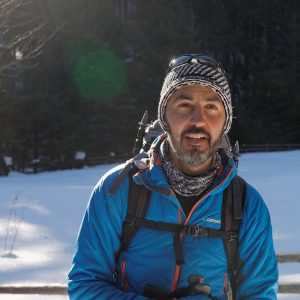